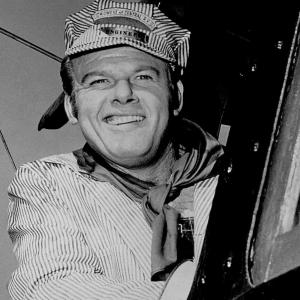 If you were a kid in the 1950s, you were probably watching Westerns on television. Cowboys dominated the medium’s earliest days, with thrilling tales of handsome heroes and black-hatted bad guys captivating younger viewers. But, as the decade progressed, producers increasingly sought to appeal to viewers of all ages with recognizable characters — both historical and fictional.

Casey Jones was a little of both, an actual 1890s railroader mythologized in a popular folk song. Alan Hale Jr. (Gilligan’s Island) stars as the title character — “The best engineer west of the Mississippi” — with Dub Taylor and Eddy Walker as his crew. While Casey’s adventures were set in the West, he wasn’t a lawman, and stories often have more to do with his relationship with his son Casey Jr. (and his dog Cinders) than with mustache-twirling villains.

And you can see what we mean every weekend on getTV! Casey Jones is now part of our “Weekends Under the Big Sky” lineup — with two episodes every Saturday and Sunday at 1:45p ET!

To learn more about this rarely rerun classic, we recently spoke with Toby Roan, film historian and author of AMillion Feet Of Film: The Making of One-Eyed Jacks. The following are highlights of that conversation, edited and condensed for space and clarity.

getTV: What made Westerns and early TV a good match?

TOBY ROAN: There were so many B-Westerns made in the 1930s and ‘40s. Parents would send their kids downtown with a quarter or dime, they'd strap on their little toy guns, hang out with their friends, and pop caps at the bad guys. When TV came along, there were hundreds of these B-Westerns — and an audience ready to watch them. My parents saw them on TV when they were kids, like their parents had seen them in the theaters.

When the Saturday matinee stuff shifted to TV, how did theatrical Westerns evolve?

Things changed after World War II. The white hat-black hat, good guy-bad guy thing didn't work so well, anymore. Now, the hero may have some issues of his own, like in the Jimmy Stewart movies directed by Anthony Mann. The Western was getting a lot darker and a lot more adult. The lighter B-Western wasn’t in favor with adults anymore, so it really pigeon-holed those movies for kids.

So, were 1950s TV Westerns just shorter versions of B-Westerns?

In the early years, yes. Roy Rogers, Gene Autry and a lot of those directors and crews just moved over to doing TV. Studios like Republic had been cranking out a movie in a week. So, the pace of TV — a half-hour episode in three days and 39 in a season — was nothing to those guys. It was just another day at the office.

And early TV Westerns gave viewers what they remembered from their younger days.

Yes. Mom could plop the kids down with the same cap guns, but now in front of the TV, for free! That’s why a lot of the TV Westerns of the era had a kid character, like The Rifleman with Mark (Johnny Crawford) and Casey Jones with Casey Junior (Bobby Clark).

Was Casey Jones a real person?

Yes. The lyrics to the folk song “The Ballad of Casey Jones” set up the story: he’s an engineer, his train is called the Cannonball, and he’s a good family man.

But there’s one big difference between the song and the TV show.

You mean the whole dying thing?

Yes! His death protecting  passengers made him legendary, but he couldn’t die on TV! Was it common to change inconvenient facts when adapting historical figures for Westerns?

Oh, yes. Roy Rogers played Jesse James, Wild Bill Hickok, Buffalo Bill, and Billy the Kid and never once was he a bad guy! The names looked good on TV, so producers just took them and ran with it.

Alan Hale Jr. stars as Casey six years before he was the Skipper on Gilligan’s Island. Was he a familiar face to Western fans in 1958?

Oh, yeah. He was a pretty busy character actor in those days. And he was in some really good Westerns, like Silver Lode with John Payne and The True Story of Jesse James, a Nicholas Ray film with Robert Wagner and Jeffrey Hunter. And, of course, his dad had been Little John in The Adventures of Robin Hood with Errol Flynn.

So, Casey Jones was not a star vehicle for him?

No. A lot of these early Western TV shows would elevate a character actor to star. It was kind of neat to see a guy like Alan Hale get a chance at a lead role.

The other big name in the cast is Dub Taylor. What will people know him from?

He was around forever: Them, Bonnie and Clyde, The Wild Bunch, The Dukes of Hazzard, a million TV shows. He was always that grouchy, old, grizzled guy. He's always fun.

Any interesting behind the scenes facts about the show.

George Blair, who went from the Republic B-Western factory to TV, directed most of the episodes. He was working with the same actors, crew and editors in many of the same locations.

One of the locations was the Corriganville Movie Ranch. What can you tell us about it?

Ray “Crash” Corrigan was a B-movie actor and he bought a big chunk of land. He built a little Western street on it and Corriganville became a location for B Westerns, and some A films. As you made a movie, you left what you built, and it would be used later for other things. The real hard-core cowboy movie freaks can identify things, from film to film.

Is Casey Jones a Western?

Just because they don't ride the range and have a shoot-out in the middle of the street every episode doesn't mean it's not a Western. The expansion of the railroad, the time period it takes place in, that's close enough for me. I would say it's a Western.

Is Casey Jones a kid’s show?

Something like Annie Oakley was clearly aimed at kids. A show like Maverick was clearly for adults. Casey Jones kind of sits in the middle. It’s more sophisticated than the kids' ones, more of a family show.

How did TV Westerns evolve through the 1950s?

Shows like Gene Autry, Roy Rogers and The Lone Ranger showed that they had an audience. By the mid-late '50s, they were gone and TV Westerns began to shift from the half-hour kid shows to the hour-long, more adult shows like Bonanza and Gunsmoke. Western movies, radio shows and TV all kind of went through the same shift, at different times, from kid-oriented to adult.

We’ve gotten enthusiastic comments from viewers who watched Casey Jones as kids and are excited to revisit it. What explains its lasting appeal?

For airdates and times, visit the Casey Jones show page. Connect with Toby Roan on his blog and Twitter.