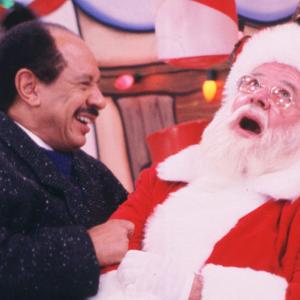 What’s your favorite Christmas memory? For many of us, it’s gathering with loved ones and watching holiday-themed episodes of our favorite shows. It wasn’t truly Christmastime until families like the Bunkers celebrated along with us!

If you miss those days, getTV is the place to be in December! Our special holiday programming kicks off Sunday, December 20 with The Johnny Cash Show and Hot in Cleveland. Then, from midnight on Christmas Eve until 6a ET on December 26, we’ve got Christmas episodes from nearly every show on our schedule — plus pilots, finales and special episodes that will delight viewers of all ages! And finally, on December 31, Good Times, All In The Family and The Steve Harvey Show help kick 2020 to the curb with some much-needed laughs!

We’ll bring our families, you bring yours! Here are ten highlights of getTV’s holiday programming this year:

Johnny Cash Christmas specials are a treasured 1970s memory, but the tradition actually began on his weekly 1969-71 ABC variety series. This 1970 episode features Roy Orbison, the Everly Brothers, and the Carter Family (Mother Maybelle, June, Helen and Anita) along with regulars Carl Perkins and the Statler Brothers. With June’s family and Johnny’s parents in attendance, this is the closest we’ll ever get to a Christmas party at the Carter-Cash house! (December 20 10p ET)

Our marathon kicks off Christmas Eve at midnight as the church plans its annual holiday pageant in a two-part episode from 1986. At 9a ET on Christmas morning, Deacon Frye (Sherman Hemsley) and prosecutor Jason Lockwood (Ron Glass) face off in court over a man who thinks he’s Santa (William Windom). And on Christmas night starting at 12a ET, Ernie adopts a donkey from the church’s Nativity scene and Thelma (Anna Maria Horsford) comes home from the Army for the holidays. (December 24 12a ET, December 25 9a ET, December 25 12a ET)

In the most infamous of this iconic sitcom’s Christmas episodes, Al Bundy is visited by a shouty guardian angel (Sam Kinison) who shows him what life would be like if he was never born. Inside joke: Kinison was originally considered for the role of Al! Look for Ted McGinley — later to become a series regular — as Peg’s husband in the Al-less world! Also look for every Married holiday episode ever made, all in the 2a-4a E time slot on Christmas Eve and Christmas Day.  (December 24 late night 2:30a ET)

When Penny’s (Janet Jackson) pocket is picked at the department store, she resorts to stealing to get Willona a present. And the social worker (Alice Ghostley) arranging her adoption by Willona (Ja’Net DeBois) is at the Evans apartment when the cops bring her home! Look for fan favorite Dap Sugar Willie as Lootin’ Lenny. And look for more Christmas episodes at 6p ET!  (December 25 11a ET)

Hunky gunfighter Ethan Cord (Lee Horsley) and his young nephews George and Ben (M.P Carter and BrianLando) rescue a newborn baby in the desert as they return from Carson City. Can they keep their pledge to the dying mother to get the child to his family in Paradise, California before it’s too late? This Western family series has no shortage of powerful episodes, and this is among the finest. Have a box of Kleenex handy. (December 25 5p ET)

8. All In The Family

In the Bunkers’ first-ever Christmas episode, Archie (Carroll O’Connor) is feeling Grinchy because his boss cancelled his holiday bonus. And Henry Jefferson (Mel Stewart) doesn’t help matters when he and Archie tussle over Santa’s race. Neither does the Meathead (Rob Reiner), who dismisses the holiday as a fairytale. “Everybody gets time off from work,” Archie replies. “If that ain’t proof he’s the son of God, then nothing is!” (December 25 8p ET)

Fred (Redd Foxx) is visited by three ghosts (all played by costumed co-star Demond Wilson) who show him the past (his St. Louis childhood), present (Aunt Esther’s Christmas party) and future (lonely life with no friends or family). Originally broadcast on December 12, 1975, this episode puts a unique spin on the familiar story of A Christmas Carol and is the only true holiday episode in the show’s six-season run. (December 25 10p ET)

Cedric (Cedric the Entertainer) is convinced that Y2K — remember that? — will wipe out the entire human race, but Lovita (Terri J. Vaughn) still wants to party like it’s 1999! Plus, Steve (Steve Harvey) and Regina’s (Wendy Raquel Robinson) plan to welcome the new millennium apart ends up bringing everyone together. Stick around for the hilarious final scene!  (December 31 11p ET)

For airdates and times, visit the getTV schedule.