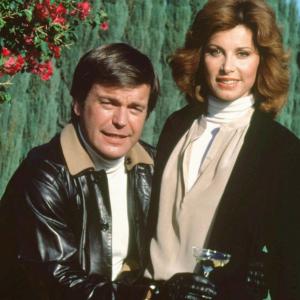 The 1970s is generally considered the Golden Age of Detective Shows, with a parade of mostly male sleuths in rumpled suits dispatching bad guys night after night. But Hart to Hart, which debuted at the tail end of the decade, flipped the script on an increasingly predictable format. Episodes didn’t end in jail, or the police station, or the morgue. They ended in the bedroom.

“We were doing a love story,” co-star Robert Wagner said in a 2005 interview. “The action and adventure was important, but the main thing was how they felt about each other.”

Just about every episode finds Bond-esque millionaire Jonathan Hart (Wagner) and his journalist wife Jennifer (Stefanie Powers) snuggling up like newlyweds in the honeymoon suite. There are murders, of course, and comic relief from their streetwise houseman Max (Lionel Stander) and dog Freeway. But everything usually gets wrapped up in time for a bedroom fade to black with our heroes smirking and giggling.

“I don’t think there was any other show on television — and there may not have been since then — with two married adults who were still in love with each other,” producer Leonard Goldberg said. “That’s what made it work.”

Goldberg and co-producer Aaron Spelling, the generals behind a battalion of successful shows like Charlie’s Angels and Dynasty, used their time-tested formula to make Hart to Hart a ratings hit. And Wagner and Powers kept it there for five seasons with their genuinely hot chemistry.

Here are ten romantic episodes to look for, weeknights at 10p ET on getTV:

Every rom-com needs a “meet cute,” but what do you do when your lead characters are already married? Creator Sidney Sheldon (who wrote the pilot episode in the 1960s) and writer/director Tom Mankiewicz (who developed it the late ‘70s) came up with the perfect solution. The Harts are introduced to the viewers while undercover — as antagonistic strangers. It’s only when they get under the actual covers that we learn they’re a couple. Look for guest villain Roddy McDowall (Planet of the Apes), a cameo by Wagner’s wife Natalie Wood, and a scene of the Harts chowing down on fast food in bed.

Typically, Max is single and ready to mingle, but this episode finds him considering cashing in the chips with his new girlfriend Charlotte (Madlyn Rhue). One problem: she’s a crook. Look for Rene Auberjonois (Benson, Boston Legal) and Daniel J. Travanti (Hill Street Blues) as thieves and note Jennifer’s reference to her “whirlwind romance” with Jonathan. That piece of exposition gets paid off in a flashback episode during the show’s final season. (See later in this list.)

Like Nick and Nora in The Thin Man had their dog Asta, Jonathan and Jennifer have Freeway. Canine actor Charlie Gray was a shelter dog when he was cast, and he essentially became the show’s fourth regular (and a total scene stealer). In this episode, Freeway falls in love with a neighbor dog, witnesses a murder, and helps to solve it. Look for romantic footage of Freeway and his girlfriend Susie frolicking in the throes of puppy love!

The Harts fear their friend Kate (Juliet Mills) will be a bumped off during a ski trip, so they follow her to a picturesque Vail, Colorado resort — with surprising results. “It all came together in that episode,” producer/director Tom Mankiewicz said. “It was the culmination of the first ten.” It’s also one of the first written by the husband-and-wife team of Bill La Mond and Jo La Mond, who would go on to become story editors . Look for Jonathan and Jennifer in an outdoor hot tub and some surprisingly suggestive dialogue about his feet.

When Jennifer is abducted by a reclusive art collector on the Hart’s fifth wedding anniversary, Jonathan and Max team up to spring her — making ingenious use of her anniversary gift. The plot is pure comic book, so suspend your disbelief and just go with it. Look for veteran actor John Dehner as the germophobic villain and an extraordinarily touching moment from Max, who professes his love for the Harts.

Jennifer whisks Jonathan off to a romantic French hotel for a meeting with her publisher, who promptly turns up missing. When the hotel staff denies he was ever there — or that his room even exists — Jonathan and Jenifer must solve the mystery. Fun fact: the “French” hotel is Greystone Mansion, an historic Beverly Hills estate that’s appeared in hundreds of films and TV episodes.

Marital strife is a rarity on Hart to Hart, but this episode has it! Or does it? When Jonathan’s ex keeps sending him gifts, Jennifer gets jealous, and the drama lands the Harts in the tabloids. But there’s a plot afoot, engineered by an old friend of Jonathan with a gambling problem. Soap fans will recognize Louise Sorel (the original Vivian Alamain on Days of Our Lives) and Nicolas Coster (Santa Barbara, Another World). And look for Jennifer literally diving head-first into bed so she can hook up with Mr. H. As Max would say, “He’s quite a guy.”

The Harts’ six wedding anniversary brings them to the Napa Valley inn where they honeymooned — which they end up buying, just so Jonathan can give Jennifer their wedding night bed! If that’s not proof of Hart to Hart’s commitment to romance, what is? Look for Antoinette Bower (Star Trek) and Daniel Pilon (Dallas) in an episode that perfectly demonstrates the show’s unique combination of intrigue, romance and whimsy. Producer Leonard Goldberg said that Cary Grant was the prototype for Jonathan Hart, and you’ll see that very clearly in this screwball comedy homage.

A romantic weekend at the beach is interrupted when Jenifer learns that a former student has committed suicide. The discovery makes her introspective and Jonathan, typically supportive, encourages her to investigate what may be murder. “The most special thing about our marriage is that we talk,” Jennifer says to Jonathan. “There aren’t a lot of people that do that.” This episode is a good reminder that Harts’ relationship was much more than physical.

Finally, after four seasons, we get the Jonathan and Jennifer origin story! This flashback episode is a masterstroke by writers Lawrence Hertzog and Donald Ross. Wagner portrays the bachelor Jonathan as snippy and impatient, reminding viewers that love helped him relax into his true self. “I’m sure we won’t get into trouble on a weekly basis,” Jonathan says to his bride-to-be in a hilariously meta moment!

For more, visit the Hart To Hart show page.