Alfonso Ribeiro: 10 Facts About the Star of CATCH 21 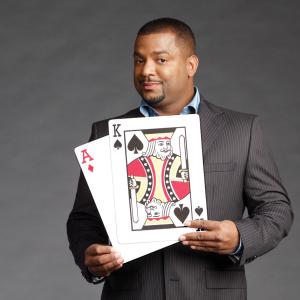 There’s a new face on getTV — and he may look familiar! From sitcoms like Silver Spoons, The Fresh Prince of Bel-Air and In The House, to Dancing With The Stars and beyond, Alfonso Ribeiro has been on TV for nearly his entire life! And many of us have grown up along with him.

And now, you can enjoy this delightfully familiar face every weeknight on getTV! Alfonso Ribeiro hosts Catch 21 Monday through Friday late nights at 4a ET — two episodes back to back. This fast-paced throwback to the ‘70s game show Gambit combines knowledge with strategy, as three contestants battle to “catch 21” with playing cards from dealer Mikki Padilla. And some episodes even feature celebrity guests!

You’ve been watching Alfonso since the ‘80s, but how much do you really know about him? Brush up on these Alfonso facts!

1. There was a Fresh Prince reunion on Catch 21!

Nearly 20 years after The Fresh Prince of Bel-Air began, Alfonso reunited with castmates James Avery (Uncle Phil), Tatyana Ali (Ashley) and Karyn Parsons (Hilary) on a 2009 episode of Catch 21. “It put a smile on my face,” Alfonso said.

2. His “biggest dream” may surprise you.

“It’s Not Unusual” to hear Alfonso singing on television, notably on The Fresh Prince with “guardian angel” Tom Jones. But he also recorded four singles for New York-based Prism Records as a teenager, including a cover of “Ooh Child.” And he’s not done yet! “My biggest dream is to record a full album,” he told US Weekly in 2018.

3. He was a winner on Dancing With The Stars.

In 2014, Alfonso competed on season 19 of ABC’s Dancing With The Stars with partner Witney Carson. The duo threw it back to Alfonso’s Fresh Prince days, with crowd-pleasing dances to “It’s Not Unusual” and “Apache (Jump On It).” He even reprised his iconic “Carlton Dance” on a replica of the Banks’ living room set. And he and Carson reunited five years later for a new series of Catch 21 episodes on Game Show Network.

Alfonso has been racing competitively since the mid-1990s, winning the Toyota Pro/Celebrity Race at the Gran Prix of Long Beach in 1994 and ’95 and 2015 and ‘16. At the 2016 edition, he reunited with former co-star Ricky Schroder. Alfonso told Us Weekly that his first car was a bright red Chevy Camaro RS he bought with his Silver Spoons salary. “It was my first splurge” he confessed.

5. He was a Ghostbuster.

In 1997, Alfonso answered the call of the Extreme Ghostbusters, joining the cast of the cartoon series based on the blockbuster movies. He voiced Roland Jackson, one of four college students recruited by Dr. Egon Spengler (Maurice LaMarche in the Harold Ramis role) to become a new team of Ghostbusters. Other shows that featured his voice acting work include Spider-Man: The Animated Series and Happily Ever After: Fairy Tales For Every Child.

He may be best known for acting on TV, but Alfonso has also been a TV director for a quarter of a century. His debut came on The Fresh Prince in December of 1995 at just 24 years old. Since then he’s directed nearly 100 episodes of shows like In The House and Meet The Browns. His most recent credit was K.C. Undercover with Zendaya in 2016.

Alfonso hosted the original run of Catch 21 for four seasons on the Game Show Network from 2008-2011 with card dealer Mikki Padilla. He then returned as host of the 2019 reboot and earned the first Emmy nomination of his long career!

8. His big break on TV came in a commercial.

In 1984, Alfonso was cast as “The Kid” in a big budget commercial starring Michael Jackson and his brothers Jermaine, Jackie, Randy, Tito and Marlon. The lyrics to Michael’s chart-topping hit “Billie Jean” were rewritten about Pepsi, and Alfonso even Moonwalks with a Pepsi can. Director Bob Giraldi had worked with Alfonso previously on a public service announcement for the LDS Church where he sang about breaking a neighbor’s window.

9. He started acting at age 8 and made his Broadway debut at 12!

Alfonso first acting job was on Oye Willie, a 1979 PBS drama series about a Puerto Rican family in New York City. In 1983, 12-year-old Alfonso landed the title role in the The Tap Dance Kid, a Broadway musical that generated nationwide attention. With no previous formal training, he became the most famous young dancer in America!

10. Performing runs in his family.

Alfonso’s grandfather was the Trinidadian Calypso singer Lord Hummingbird, and his aunt was a dancer on the 1960s sketch comedy series Laugh-In, so performing is in the Ribeiro DNA. “I was always entertaining as a kid,” he told KROQ in 2019. “So my dad said, ‘Let’s give him an opportunity to do it [professionally].” Forty years later, he’s still entertaining us!

For airdates and times, visit the Catch 21 show page. Play the web version of the game here. And connect with Alfonso on Facebook, Twitter and Instagram.